Jack Hogan was diagnosed with retinitis pigmentosa at only two-and-a-half years old. But with the help of connections made with the Foundation, Jack became the first-ever recipient of the FDA-approved gene therapy known as LUXTURNA. 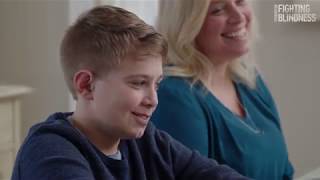 At 13-years-old, Jack Hogan became the first-ever recipient of the FDA-approved gene therapy known as LUXTURNA.

“I don’t have to hold onto my friend’s shoulders anymore when I go to a movie theater or go outside at night,” says Jack. “I’ve never ridden my bike at night, and now I can.”

I don’t have to hold onto my friend’s shoulders anymore when I go to a movie theater or go outside at night. I’ve never ridden my bike at night, and now I can.

Jack was diagnosed with retinitis pigmentosa (RP) associated with RPE65 gene mutations when he was only two-and-a-half years old. Before Jack was treated, he had no peripheral vision and could not see at night.

“Knowing that there was no cure, I felt there had to be something,” recalls Jack’s mother, Jeanette. “So that’s when we found the Foundation Fighting Blindness.”

Jack’s parents, Jeanette and Shawn, formed a VisionWalk team with the Foundation to raise money to find a cure for RP. Jack’s family and friends have participated as “Team Jack Attack” in the New York VisionWalk since 2009, raising over $79,000 in the last 10 years. Jack is also the Youth Chair for New York’s VisionWalk.

Over the years, Jeanette and Shawn have been active members of the Foundation’s local chapter, learning all they can about research at chapter meetings and presentations. That’s how they met Eric Pierce, MD, PhD, Director of the Ocular Genomics Institute at Mass. Eye and Ear. Jack was Mass. Eye and Ear’s first patient when LUXTURNA was approved by the FDA.

“The surgery was definitely successful,” says Jeanette. “Jack can see a whole lot more, he can see in the dark, he has better peripheral vision and he’s a lot more confident.”