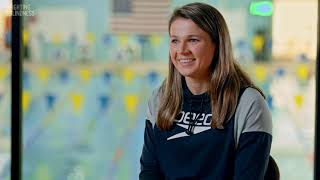 Rebecca Meyers, who goes by Becca, is a two-time Paralympic swimmer for Team USA. She’s a six-time medalist, winning three gold and one silver medals in Rio 2016.

Born and raised in Baltimore, Maryland, Becca was diagnosed with Usher syndrome type 1 (USH1) at only four years old. Becca was born profoundly deaf and suffers from severe balance issues as well as partial blindness due to retinitis pigmentosa (RP).

As the youngest of three growing up, Becca always wanted to do whatever her siblings were doing, like playing soccer, tennis, basketball, or skiing down a black diamond mountain. And she never once let her diagnosis with Usher syndrome stop her from doing exactly what she put her mind to.

“I have not let my disabilities hold me back,” says Becca. “I have often used them as motivation to prove people wrong. Yes, I can swim competitively. Yes, I can ski down a black diamond. Yes, I can graduate from college.”

Since Becca was so driven to keep up with her siblings, she started swimming at only five years old. As she got older, swimming became Becca’s “happy place.” At the age of 17, after years of hard work and dedication, Becca competed in her first Paralympic games in London and won a bronze medal in the 100-meter freestyle and a silver medal in the 200-meter individual medley.

Becca now trains with the Nation’s Capital Swim Club, which consists of all able-bodied swimmers. Her coach, Bruce Gemmell, will print out the workouts with a big font, which allows her to follow along throughout the workout. If he needs to communicate with Becca, he’ll write down on a whiteboard or in the notes section of his iPhone and then share it with her at the end of practice once her cochlear implants are back in.

I have not let my disabilities hold me back, I have often used them as motivation to prove people wrong.

If the lighting is too dark in the pool, especially when the days get shorter, Becca does often struggle to see as clearly. Becca describes her current vision as, “looking through two straws.” But she never lets it define her day and just works even harder at training the next day.

“You will have tough days,” says Becca. “But you have to be patient and kind to yourself. Yes, I struggle from time to time, and I get frustrated with my limitations sometimes, but I don’t let it stop me from achieving my dreams.”

Now 26 years old, Becca is also currently a full-time student at Franklin & Marshall College and plans to graduate in May of next year before going to the 2021 Paralympics.

Becca recommends relying on family and friends for support and emphasizes that it’s OK to have and ask for help. Becca also attributes her success to her yellow lab-golden retriever mix guide dog named Birdie, from The Seeing Eye, who she’s had for five and a half years.

Becca is very optimistic about finding treatments and cures for blinding retinal diseases like RP. She also wants to be a role model for those with blindness and visual impairments because growing up, she didn’t have anyone she could look to as a mentor.

“I try to use my social media to show young kids that just because you have a disability does not mean you are limited,” says Becca. “You just have to find that one thing that makes you feel free and go for it.  I want to be a role model to these kids and inspire them to not let their disabilities hold them back. You can do anything you set your mind to.”