Al Linde has learned to “just roll with it” throughout his life to overcome many challenges.

One of Al’s biggest obstacles was in 1993, when he was diagnosed with stage 4 non-Hodgkin lymphoma and underwent 16 months of chemotherapy until he was in remission.

A few years later another road bump occurred when Al was dining in a dimly lit restaurant and saw “a big bump,” as he described, in the text of the menu. After this incident, he went to see a doctor and was diagnosed with the beginning stages of age-related macular degeneration (AMD) at the age of 47. 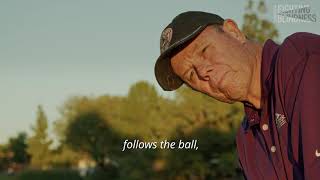 As a city letter carrier in Phoenix, Arizona, Al was very worried about his diagnosis initially, as a big role in his job involved reading. So, in 1998, he sought out treatment that, unfortunately, left a permanent scar and blind spot in the corner of his right eye and another small scar across the center of his left eye. But despite these complications, Al was still able to continue his job, drive a car, and read without any special magnification.

For the next seven years, Al’s eyesight remained stable and he was even promoted to a regional position at his job, which required him to travel over five states. But after a few years, Al realized his vision loss was progressing and didn’t think traveling was a good idea any longer. Al investigated other treatments and found a retinal specialist who recommended a new injection treatment for wet AMD that helped him continue working for another couple years until he retired.

Had it not been for the strides made in research by organizations like the Foundation Fighting Blindness, I most likely would have had to retire earlier on disability. This treatment made this very debilitating thing, if I let it, all manageable and I didn’t let it get me down.

“Had it not been for the strides made in research by organizations like the Foundation Fighting Blindness, I most likely would have had to retire earlier on disability,” says Al. “This treatment made this very debilitating thing, if I let it, all manageable and I didn’t let it get me down.”

After Al was officially declared legally blind by his doctor, he was referred to a Veterans Affairs’ blind rehabilitation facility in Tucson, Arizona where he learned how to use many resources, like how to use a white cane and use zoom text on the computer, that help to “pick him up” and continue to thrive.

“You just can’t dwell on the negative and you have to push forward,” says Al. “I think my bout with cancer really helped my outlook. I feel like I can get through anything now.”

Now 68 years old, Al keeps busy by publishing a monthly newsletter for the local letter carrier’s union and by participating in the Foundation’s Annual Arizona VisionWalk and is a committee member for the newly organized Arizona Golf Tournament.

Al also enjoys golfing in his local men’s league. Al rides his three-wheel bicycle to the golf course every Wednesday and calls it his “day of independence” when his wife doesn’t have to drive him.

“I got the courage to tell the league I’m legally blind and ask if I could try to play with them,” says Al. “They just have to show me where the ball goes once I hit it. They’ve welcomed me, and I’ve been playing with the same league for 4 years now. I’ve made of few of them mad over the years when I beat them,” he jokes.

Al’s journey over the past 25 years is one of resilience and he wants others to live with the same positive attitude.