A Boy with No Boundaries

Kai Wang was 18 months old when he was diagnosed with the condition. His parents never imagined the extraordinary journey they would take with their son when they learned he had a condition that would render him blind. 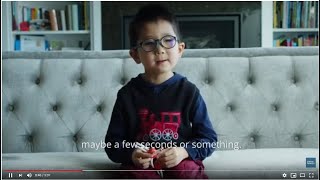 Last summer, Kai Wang devoured 12 audio books on science and engineering feats like the Golden Gate Bridge, atomic bombs, and the cotton gin. He listened to the books over and over — some as many as five times. One of his favorite titles was “Rocket Men,” a 400-page book for adults on Apollo 8, the first manned mission to the moon.  He finished it in a week.

Kai enjoys talking with his mom, Mina, about everything he learns and reads. But it’s not just banter for him — he’s often quizzing her to see what she knows.

“He’ll ask me about the order of elements in the periodic table or what’s happening to atoms on the sun, but he knows the answers,” says Mina. “I’m a molecular biologist, and any time I sit down and explain what I am doing in the lab, he understands it.”

Kai was 18 months old when he was diagnosed with the condition. Mina and her husband, Lingeng, never imagined the extraordinary journey they would take with their son, when they learned he had a condition that would render him blind.

But the initial diagnosis for Kai came as a devastating shock.

“We knew he was farsighted and looked at things from the corner of his eyes. But we just thought his glasses prescription was wrong,” recalls Mina. “Some doctors thought he might have something serious like a brain issue. We told them, ‘No way. He’s a really smart guy.’”

An MRI confirmed that Mina and Lingeng were right — Kai’s brain was perfectly normal.

Next, doctors wanted to look at Kai’s retinas. Again, his parents felt certain that nothing abnormal would be found, but agreed to testing at the University of California, San Francisco. Dr. Jacque Duncan, a clinical researcher and chair of FFB’s Scientific Advisory Board, guided the family through the process. One of the exams was an electroretinogram (ERG), which measures the retina’s sensitivity to light.

“When they did the ERG, we went out for a coffee break with little worry they would find anything,” says Mina. “But when we returned, Dr. Duncan delivered the news that our son had a condition called LCA. His retinas were not normal, and he would lose the little vision he had left.”

The news was crushing for Mina and Lingeng. For the next six months, Mina struggled with a wide range of feelings including denial, guilt, and depression.

“I was in shock. At first, I couldn’t imagine associating my son, my own baby, with the words ‘blind person,’” says Mina. “Some doctors told me matter-of-factly to teach him braille and print. But I didn’t know braille. How was I supposed to teach him? I didn’t know where to start. I had a meltdown.”

Mina credits several people and professionals, including those in the FFB community, with helping her move forward.

For example, Mina worked at UC Berkeley, the same institution as Dr. John Flannery, an FFB-funded retinal researcher who, coincidentally, was working on CRB1, the same retinal-disease gene affecting her son.  “It was great to learn he had 200 mice in his basement with CRB1 mutations,” she recalls.

Mina says that early interventions from vision and orientation and mobility specialists, before Kai was 2 years old, played a big role in his remarkable growth and development. “We were lucky. His vision teacher, Prindle Paux, was fearless. She called us out if we were doing anything for Kai that prevented him from being independent. Prindle kept telling us he was capable of doing anything other people do.”

When Kai was three, his parents visited 20 preschools to find one that was a good fit for him. Ultimately, they enrolled him in The Berkeley School (TBS), where he was mainstreamed and strongly encouraged to be active and independent. “He thrives there. He loves rock climbing and tree climbing. He races bikes with his friends on a track,” says Mina. “I usually have to advocate for him, but I didn’t at TBS. They really laid the foundation for who he is now.”

For all Mina and Lingeng have done for Kai, he has in turn transformed the family, including his baby brother, Skyler, who is learning how to use his brother’s assistive technologies and accommodations, and appreciating the beauty in diversity.

“Before Kai’s diagnosis, I focused on my research and daily routine. But our experience with him expanded our world. We invested more time in parenting. We also got involved with FFB and do VisionWalk every year,” says Mina.  “We’ve learned not to judge what is appropriate for him. We take Kai to everything. We immerse ourselves in a sea of enrichment classes: basketball, soccer, baseball, karate, carpentry, theater, etc. He loves to see Broadway musicals even though he can’t see the stage. He has a different experience from us, but that doesn’t mean he shouldn’t appreciate musicals in his own way.”