Foundation Investing in Drug to Slow Many Forms of RP

The Foundation Fighting Blindness Clinical Research Institute (FFB-CRI) has announced an investment of up to $7.5 million to advance the potential therapy into and through a Phase II clinical trial. 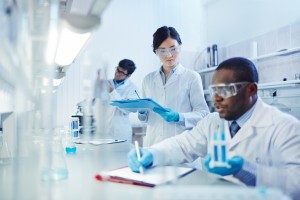 Sometimes, fighting blindness means helping people save the vision they have, or at least slowing disease progression enough so they can maintain useful vision for all of their lives.

That's the idea behind a promising, emerging drug for retinitis pigmentosa (RP) known as N-acetylcysteine-amide (NACA). The Foundation Fighting Blindness Clinical Research Institute (FFB-CRI) has announced an investment of up to $7.5 million to advance the potential therapy into and through a Phase II clinical trial. In several animal models, including previous FFB-funded lab studies of rodent models at Johns Hopkins University, NACA slowed retinal degeneration.

Nacuity Pharmaceuticals, Inc., a start-up company in Fort Worth, Texas, owns the rights to NACA for ophthalmology and will be developing the drug with support from FFB-CRI. As part of its agreement with Nacuity, upon commercialization of NACA, FFB-CRI will be entitled to royalty payments from future NACA sales.

"Based on the knowledge we've gained in lab studies, we are excited about NACA's potential for saving vision," says Patricia Zilliox, PhD, chief drug development officer at FFB-CRI. "Oxidative stress causes cell degeneration and vision loss in virtually all forms of RP, so we are hopeful that NACA, with its anti-oxidative properties, can benefit most people with RP, regardless of the gene mutation causing their disease."

NACA is derived from N-acetylcysteine (NAC), a drug approved by the U.S. Food & Drug Administration (FDA) for the treatment of acetaminophen overdose by lessening hepatotoxicity. The benefits of NACA over NAC are believed to include greater lipophilicity, or ability to dissolve in fats, and tissue penetration therefore increasing anti-oxidative properties in the retina.

The drug is designed to slow vision loss by protecting retinal cells from oxidative stress, a process that accelerates and exacerbates degeneration in many inherited retinal conditions including RP. When the cells in the body process oxygen, they produce byproducts known as free radicals, which can be harmful if the body is unable to neutralize them. In certain diseases and conditions, cells have a difficult time neutralizing free radicals, and damage occurs.

"We are excited to make a significant investment in NACA, because the drug has an opportunity to help a substantial number of people with RP, a blinding retinal disease affecting 100,000 people in the U.S. and more than 2 million worldwide," says William T. Schmidt, chief executive officer at FFB. "The fact that NACA is derived from an FDA-approved drug also boosts our confidence that it can make it through the clinical development process and out to the people who need it."