The study — known as RUSH2A (“R” stands for “rate of progression”) — is beginning in spring 2017 and will take place at about 20 clinical sites around the world. RUSH2A investigators will use a variety of technologies to monitor changes in vision and retinal structure to document and analyze disease progression. 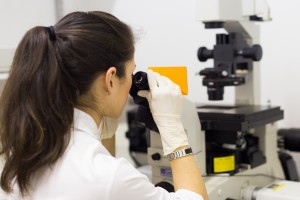 USH2A is a target for retinal-disease researchers, because mutations in the gene are the most common cause of Usher syndrome type 2, which causes combined vision loss from retinitis pigmentosa (RP) and hearing loss from inner ear dysfunction. Also, USH2A mutations are a leading cause of RP without hearing loss (i.e., non-syndromic).

A major challenge in providing prognoses for USH2A patients — and designing clinical trials for potential therapies — is the wide variability in the severity and rate of progression of the disease and its symptoms. Researchers have identified hundreds of USH2A mutations — misspellings in the patients' genetic code. Some of these defects lead to RP only. Others cause Usher syndrome.

To gain a better understanding of how USH2A mutations affect the severity and progression of vision loss, the Foundation Fighting Blindness Clinical Research Institute (FFB-CRI) is launching a four-year natural history study of 120 people with USH2A mutations. The study — known as RUSH2A ("R" stands for "rate of progression") — is beginning in spring 2017 and will take place at about 20 clinical sites around the world. RUSH2A investigators will use a variety of technologies to monitor changes in vision and retinal structure to document and analyze disease progression.

"We hope the results of RUSH2A will help USH2A therapy developers, including companies and research institutes, better design clinical trials by enabling them to enroll the patients who are most likely to respond to treatment," says Patricia Zilliox, PhD, chief drug development officer, FFB-CRI. "For example, if a company is developing a therapy to prevent vision loss, it will want clinical trial participants who are most likely to experience vision loss in the short term to determine if the treatment has an effect."

"We greatly need a study like RUSH2A to move USH2A therapy development forward," says Jacque Duncan, MD, University of California, San Francisco, and chair of the Foundation's scientific advisory board. "The data we glean from RUSH2A will be invaluable to investigators developing treatments for USH2A-related retinal degeneration because it may inform clinical-trial design and patient selection for potential therapies. I am very excited for the retinal degenerations clinic at University of California, San Francisco to be a site for the RUSH2A study."

Generally speaking, if a person has Usher syndrome caused by USH2A mutations, they are born with moderate to severe hearing loss, which progresses. They are also usually diagnosed in childhood, or during teenage or early adult years, with RP, which causes progressive vision loss.

A research team from the Netherlands found that people with USH2A mutations causing Usher syndrome generally had worse visual prognosis than those with only RP.

"While there is some good published research about USH2A, a well-designed, natural-history study, conducted over a few years, is going to give more precise information, especially about disease progression," says Dr. Zilliox. "We need better, long-term data to design better, more successful clinical trials for emerging therapies."

ProQR Therapeutics, a biotech company headquartered in the Netherlands, is working on two treatments that work like "genetic tape" to repair two common, disease-causing USH2A mutations.