In its fourth year, the meeting is becoming the world’s most comprehensive overview of the promising research underway for emerging IRD treatments. 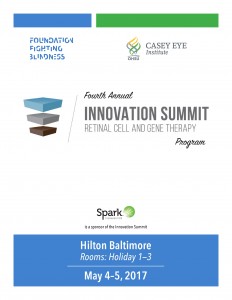 For anyone wanting to know about the latest clinically focused research for inherited retinal diseases (IRDs), the Innovation Summit for Retinal Cell and Gene Therapy was the place to be. In its fourth year, the meeting is becoming the world's most comprehensive overview of the promising research underway for emerging IRD treatments. Hosted by the Foundation Fighting Blindness and Casey Eye Institute (Oregon Health & Science University), the Innovation Summit featured 44 information-packed presentations from research and industry leaders. Summit co-hosts were Casey's Mark Pennesi, MD, PhD, and Trevor McGill, PhD, and Patricia Zilliox, PhD, chief drug development officer of FFB's Clinical Research Institute. More than 250 researchers and industry leaders were in attendance. Spark Therapeutics was a sponsor of the event.

The Innovation Summit was held May 4-5, before the annual meeting of the Association for Research in Vision and Ophthalmology (ARVO), May 7-11 in Baltimore. As the world's largest eye research conference with about 12,000 attendees, ARVO's enormity and depth alone can put attendees in an alternate state of consciousness. But what made the Innovation Summit so special was its focus on potential therapies, many of which are in clinical trials, for IRDs. Here are summaries of the meeting presentations: Cell Therapy Presentations