“The Only Disability is a Bad Attitude”

Born with LCA, Anthony began wrestling in the seventh grade, continued through high school, and eventually became the subject of a documentary about his life as a blind wrestler. He then received a life-changing call from the United States Olympics Committee, asking him to compete on the Paralympic Judo Team. 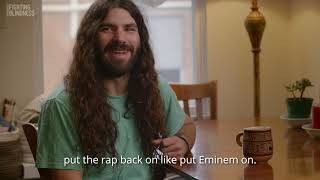 Anthony Ferraro comes from a large family: His mother is the second oldest of 13, Anthony himself is the youngest of five, and he has 60 cousins. He is the only one of the bunch who was born blind from Leber congenital amaurosis (LCA), but his cousins didn't treat him any different growing up. They always included him in activities, from surfing and skateboarding to all kinds of sports. "I never really thought anything different about it," Anthony said about growing up blind. During his younger years, he attended the St. Lucy Day School in Philadelphia, where they helped him excel at reading and writing in braille and how to integrate himself into the everyday world.

People always ask me what it’s like to do things with a disability, and I always tell them I don’t really know. I know people without arms or legs who are climbing mountains. I also know people who have nothing wrong with their bodies sitting at home feeling sorry for themselves. My point being that the only disability is a bad attitude.

Anthony started seventh grade at the local public school in his hometown of Spring Lake, New Jersey. "I was the only blind kid, and I tried so hard to fit in," he said of the initially difficult transition. "I even tried to read my braille books under the table so that the other kids wouldn't see." He joked that he started enjoying TV and junk food too much from having all the extra free time not commuting to Philadelphia any longer.

His older brothers, being older brothers, poked fun at him for putting on extra weight, so he took up wrestling to stay active, inspired by his brother Oliver, a wrestler in high school at the time. "I was awful," Anthony laughed about his first year of wrestling, "The two wins I had that year were forfeits. When the season ended, I decided I didn't want to be the mediocre blind kid feeling sorry for myself and was determined to get better." He joined a wrestling club to sharpen his skills, and even though the club had never worked with a blind wrestler before, they welcomed him and learned how to train him. He trained as much as possible, dedicating that summer to wrestling.

He entered eighth grade stronger and better than ever and even won some championships. One of the parents complained because they thought Anthony had an unfair advantage over their children since he had to stay in contact with his competitor to know where they were and avoid getting injured. Anthony didn't let any of the negativity get him down, including accusations that he faked being blind.

Though Anthony planned to join his brothers at a private Christian Academy to finish high school, the school rescinded Anthony's offer because of a sudden death in its administration. "They didn't want to have to provide accommodations like turning my books into braille, and they said they didn't think I would fit into the culture environmentally and academically. It was upsetting and the first real shock of life not being fair to me," Anthony said. He ended up going to a different private school, which accepted him with open arms. Anthony continued to excel at wrestling and went on to make a name for himself. He won district championships and was the varsity captain sophomore, junior, and senior years.

Anthony's older brother Oliver was passionate about filmmaking. He featured Anthony in one of his projects – about being a blind teenager, his adversity in life, and obstacles in being a blind wrestler. An independent filmmaker, Chris Suchorsky, reached out to Oliver, and they decided to make it into a feature-length documentary. They followed Anthony around during his senior year, focusing on his wrestling journey. The film was put on hold due to other priorities for both Chris and Oliver. A couple of years passed, and they decided to start working on it again, when tragically, Oliver passed away suddenly in his sleep at only 27 years old. Anthony was hit hard by the death of his older brother.

In memory of Oliver, Chris finished the film, which evolved into a two-hour documentary, 14 months later. The only problem was he needed some help with post-production costs. Chris created a teaser trailer and wrote up the backstory and put it on Kickstarter to help raise the last of the money. Within four days, they surpassed their original $30,000 goal enabling Chris to finish the film. The trailer was circulated so much on social media that it had over a million views.

Someone from the United States Olympics Committee saw the story and reached out to Anthony. "I laughed and told them they had the wrong number!" he said about the call that changed his life. The call came at the perfect time – not only was he still mourning his brother's death, but his mother had just recovered from a traumatic brain injury. He knew he needed to start doing something to keep himself going so that he didn't dwell on all the unfortunate events in his life. Although wrestling isn't part of the Paralympics anymore, Judo is a form of mixed martial arts and is the closest thing to wrestling. They offered to train him so he could compete on behalf of Team USA. He happily accepted, and after his training, he started touring the world competing in qualifying matches – and winning. All the travel was self-funded, but thanks to the support of his former coaches, friends, and family, he was able to make it to number one in the country. He even made it to the top 20 in the world before the COVID-19 pandemic stuck.

To support himself and his Olympic dream, Anthony does motivational speaking at various organizations and schools. He helps with different types of seminars and wrestling clinics, and even plays guitar at various bars and restaurants around New Jersey. "I have a lot of side hustles to help fund my Olympic journey while I wait for bigger sponsors. Even if I don't get them, it doesn't matter, because I love everything I do." Although the temporary hiatus is disappointing, he is embracing the extra time to train and stay strong.

"People always ask me what it's like to do things with a disability, and I always tell them I don't really know. I know people without arms or legs who are climbing mountains. I also know people who have nothing wrong with their bodies sitting at home feeling sorry for themselves. My point being that the only disability is a bad attitude," he said. This comment about attitude is his motto, and he ends all of his motivational speeches with it.