Taking Their Story of Vision Loss on the Road

Among the 600 attendees at VISIONS 2013 in Baltimore are Rollie and Sandie Purvis, the parents of two brothers who star in a full-length documentary titled Driving Blind. While the average film-goer isn’t yet able to see the film, it has been, and continues to be, screened in festivals nationwide. Perhaps most importantly for those focused on retinal diseases, it tells the real-life story of two guys who wanted to see as much of the United States as possible before losing their vision completely.

Justin and Tod Purvis have choroideremia, a progressive retinal disease which begins with nightblindness and loss of peripheral vision. Because they’ve lived all over the world—Rollie’s retired military—it’s no surprise the brothers would go on a road trip together; but not everyone takes a film crew along. Just so happens that Justin, who performs and teaches improv in Washington, D.C., and Tod, a TV editor, had the connections to make it happen.

Thirty-six days, 36 states and 13,000 miles later, subjects and crew had the makings of a film in hand, one that’s beautifully shot and showcases the Purvis boys’ talent for making friends and appreciating what’s important. During a break between conference sessions, I had the chance to interview Rollie and Sandie, who make a cameo appearance at the end of the film and are as eager as their sons to get it into as many theaters as possible.

First, they described the origin of the film: 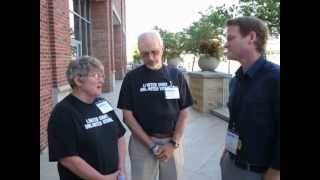 Then, Sandie recounted what it was like to hear from doctors, a little more than 20 years ago, that her sons had a retinal disease: 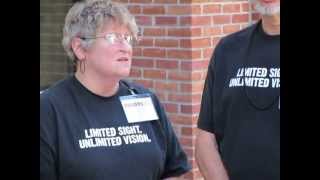 They also explained the motto on the T-shirts they were wearing, “Limited Sight. Unlimited Vision.”: 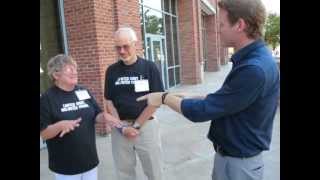 And, finally, Sandie told me what she and Rollie hoped to get out of the VISIONS conference: 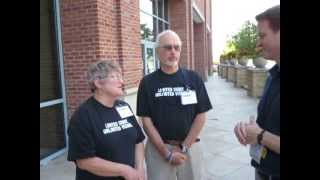