Seeing Through Your Disability

30-year-old Lance Johnson is a video editor and podcaster living in Brooklyn, New York. Despite being diagnosed with retinitis pigmentosa (RP) at a young age, Lance has never let his RP change his drive and passion for creating. 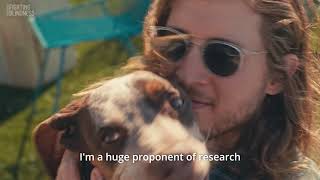 30-year-old Lance Johnson is a video editor and podcaster living in Brooklyn, New York. Despite being diagnosed with retinitis pigmentosa (RP) at a young age, Lance has never let his RP change his drive and passion for creating.

At the age of 12, Lance was diagnosed with RP. Although Lance wasn’t showing any vision loss symptoms at the time of his diagnosis, it wasn’t a surprise to him, as his mom has RP as well.

“Since I was diagnosed at such a young age, I wasn’t aware of how much it was going to alter my lifestyle in the future,” says Lance. “Growing up with my mom legally blind, I experienced firsthand what she could and couldn’t do, so that helped me know what to expect and wrap my mind around it.”

Lance grew up in the small town of Hope Mills, North Carolina, where he began telling and writing his own stories, even producing independent films on his own. After graduating high school, Lance attended film school. But while in film school and shortly after graduating and entering the workforce, Lance kept his RP from his peers or advisors, which made him anxious working on shoots.

“Growing up, I hid the fact that I had RP and never really talked about it,” says Lance. “I didn’t want anyone to treat me differently, especially working in such a visual-based career. But when I finally told my employer for the first time, it felt like a huge weight off my back.”

After opening up at work, Lance decided to post a video on social media sharing his RP with all his friends and family and was shocked at all the positive feedback. This was when Lance realized being open about his diagnosis was actually an advantage, not a disadvantage like he initially thought.

To continue moving toward a fully transparent life, at 27 years old, Lance decided to move to New York City, not only for his career but also for the accessible lifestyle that the city has to offer.

“New York City checked both of those boxes; it allows me to feel more independent and less limited,” says Lance. “There are not many places in the U.S. that are accessible like that, where you can rely on public transit to get around easily.”

Moving to New York City not only improved Lance’s mobility, but it helped to jumpstart his career as well. Lance currently edits social media video content for various brands, which he prefers over videography now, since he can stay home and use his own equipment, which is more comfortable and familiar. Lance describes having quite a bit of his central vision remaining, which he explains helps with editing.

Lance also created and produces his own podcast, The See-Through Podcast, which generates transparency for disabilities through raw conversations with those in the community. His podcast guests include various artists, athletes, influencers, motivational speakers, comedians, scientists, researchers, technologists, and human rights activists.

“I wanted to create this outlet to express the emotions that come along with being visually impaired and having a disability,” Lance recalls. “I’ve learned so much about myself and the disabilities community as a whole from doing my podcast. I’m all about being transparent, and I definitely want to be an advocate for acceptance of disabilities.”

Lance thinks of each podcast as a mini-documentary and wants to tell other’s stories in a fascinating and entertaining way.

“I talk to a lot of visually impaired people on my podcast, but I interview anyone in the disability community because I think there's a lot of overlap when it comes to accessibility issues,” says Lance. “Plus, I'm looking for interesting stories and how people adapt to their disability.”

To get involved with the visually impaired community further, Lance has become a member of the Foundation Fighting Blindness’ young professionals’ group in New York.

“Hearing other perspectives from people who have more vision loss than me and learning how they’re not letting it slow them down is so inspiring for me,” says Lance. “It just keeps me going, and I want that to empower my listeners too.”

In addition to being a huge proponent of vision research, Lance wants to help raise awareness for RP and other blinding diseases.

“A lot of my friends and family don’t understand what my field of vision truly is and that RP affects everyone so differently,” says Lance. “But I want to continue being open about my invisible disability. There's something very beautiful in accepting your disability and learning to live with it.”

This Beacon Story is brought to you in partnership with Genentech, a member of the Roche Group.