Mark does not let his retinitis pigmentosa diagnosis keep him from doing what he loves most, including spending quality time with his family. And in 2019, Mark began participating in a clinical trial, which he describes as life-changing. 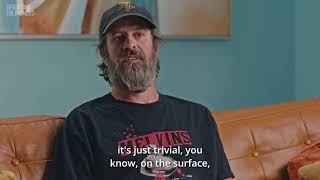 When Mark Curley was first diagnosed with retinitis pigmentosa (RP) at 13 years old, he wasn’t bothered by the news. Mark’s grandfather had RP, so his parents knew there was a chance Mark or his brother could have RP as well. And by watching his grandfather own and operate a motel most of his life, Mark knew RP wouldn’t slow him down either.

Growing up, Mark didn’t have any issues with his vision and was very active, riding dirt bikes, participating on the baseball and tennis teams, and playing the saxophone in the marching band at his high school.

But around his early twenties, Mark started to notice a change in his vision, especially in dim lighting or in the dark. At first, Mark was upset, but his perspective on his journey with RP has changed a lot over the years.

Today, Mark would describe his sight as tunnel vision with blind spots, with only a field of vision of about ten degrees or less. With Mark’s vision loss progressing more rapidly over the years, he’s learned to adapt quickly and positively shift his mindset.

“It’s all about adaptation, not just with work, but with my personal life as well,” says Mark. “You have to put forth the effort if you want to be successful and remain positive with a degenerative disease like mine. RP is not a life-ending disease; you just have to learn how to accept your diagnosis and adapt.”

On a day-to-day basis, Mark uses a white cane to navigate and has no problem asking for help from others, especially his family. Mark’s primary motivation in life is his wife and children. Mark enjoys playing cornhole and wrestling with his boys.

“I’m very touchy-feely with my children because I can’t see their faces or their facial expressions,” says Mark. “I love to put my hands on my kid’s shoulders or put my hand on their back, and they’re like that with me too. We have a very deep connection.”

When he’s not spending quality time with his wife and sons, Mark works alongside his father and brother as vice president of operations for their family-owned business in Atlanta, Georgia. The Curley family business, 1st Quality Equipment Company, has been in operation for over 30 years, and Mark began working there in 2000.

Mark’s entire family is also very involved with the Foundation Fighting Blindness and has supported the mission since 1984. Because Mark’s grandfather had RP, Mark’s parents were proactive in seeking out the Foundation, knowing their children had a chance of having RP as well.

Every year Mark and his family participate in their local Atlanta VisionWalk. Mark asks his friends, family, and colleagues to donate and shares his story of how the Foundation’s work has directly affected him.

“The Foundation Fighting Blindness is my one true hope at being able to navigate through life and still maintain the vision I’ve got,” says Mark. “The research that the Foundation is funding to try and stop a disease like mine, it's beyond comprehension. And I’ve seen a direct benefit from all this research by virtue of getting to participate in a clinical trial.”

In August 2019, Mark began participating in a gene therapy clinical trial. Mark was excited for the opportunity to participate in this clinical trial, which will span over a total of five years.

This clinical trial consisted of an injection in Mark’s left eye to prevent any further degeneration and maintain the remaining central vision. Now, two years later, Mark’s vision in his left eye has remained stable. Meanwhile, his right eye degeneration has continued to progress. Mark believes, so far, that the treatment has been successful.

“This treatment has been life-changing. It hasn’t improved or restored any of my vision, but it has maintained the vision I’ve got,” says Mark. “Knowing that one day I may not be completely blind, it just means a world of difference to me. I couldn’t ask for anything more.”