Learning to Fall After Vision Loss

When Justin’s vision loss progressed quickly due to retinitis pigmentosa at 25 years old, he thought skateboarding wouldn’t be possible anymore. Ten years later, with the help of his white cane and audio devices, Justin is now working to enhance accessibility in skateboarding for the blind and visually impaired community. 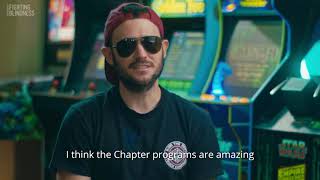 Las Vegas, Nevada native Justin Bishop was diagnosed with retinitis pigmentosa (RP) at the age of eight. Justin began skateboarding around the same time, not thinking at all about when his vision loss would really affect him.

When Justin was 19 years old, he got in a car accident where he couldn’t remember seeing the other car, so he went for an eye exam, learning his RP was advancing much faster than initially expected. Justin’s doctor recommended genetic testing, which revealed he has mutations in his RPGR gene, which leads to X-linked retinitis pigmentosa (XLRP), one of the most severe and early-onset forms of RP.

Once Justin lost his driver’s license at 20, he began skateboarding even more, feeling like he had a deadline of when he would lose his sight entirely. Then around 25 years old, Justin felt like his vision was turning milky and gray, and suddenly, he couldn’t see anymore. For the next few months, Justin didn’t leave his house, stopped skateboarding, and struggled with depression.

“After grieving over my vision loss, I had to pick up the pieces and learn to be blind,” says Justin. “I started to take mobility training to learn how to use a white cane and became educated on voiceover technology; I wanted to use all the tools I could to move forward. I accepted that blindness is just a part of who I am now.”

After not picking up a skateboard for about four years, one of Justin’s friends recommended he work for his organization called Sport-Social, which teaches children on the spectrum social and motor skills through sports like skateboarding. While working with these children, Justin realized he was still just as capable of skateboarding. Even after falling, Justin realized he missed that thrill it gave him and promised himself never to give up skateboarding again.

“I didn’t think that I could skateboard anymore, and I let my blindness define who I was going to be,” Justin recalls. “Those years were the worst of my life because deep down, I’m a skateboarder. All I could do was think about skateboarding even though I was trying to run away from it. Having skateboarding back in my life made me feel like ‘me’ again.”

Now 35 years old, Justin has relearned and developed his own way of skateboarding that works for him. Justin uses sound devices called beeper boxes, which are audible 360 repeat beeping sounds, giving him a better sense of distance and understanding of what direction he’s facing.

Another tool Justin uses when skateboarding is a white cane to help know what’s in front of him. To carve and ride bowls, Justin uses his cane which lets him know where pockets are and the steepness of the bowls. Most white cane users in everyday life use a marshmallow cane tip with a tap method. But while skating, Justin uses a rolling ball cane tip and a constant contact method, meaning his cane is always on the ground, which helps him know what the terrain is like and what’s happening in front of him. The white cane Justin uses to skate is also a slightly shorter version.

“Skateboarding is the perfect sport for someone who is blind or visually impaired,” says Justin. “Your hands are free for your cane, and you don’t have to rely on anyone else.”

Justin is also working with a company called Not Impossible Labs to create a new sound device. Justin describes this prototype as a sound beam that a skater won’t hear until they get to the location. That burst of sound lets a skater know the timing to pop, which is much more precise than a beeper box. So far, Justin has used this device at the Dew Tour competition.

“A lot of skateboarding is about trial and error and just pushing yourself through it,” says Justin. “It may take me longer to land a new trick, but I’ve always had that dedication to keep going, no matter what.”

Another benefit of skateboarding for Justin is the community. Justin has become close friends with Dan Mancina, who is also a blind skateboarder diagnosed with RP. Dan and Justin not only push each other but are great competitors as well.

Having the skateboarding community has been an enormous asset to Justin in coping with his vision loss. When skating the streets or at a skatepark, Justin often gets asked about the beeping noises, and he’s always willing to enlighten others about the blindness and wants to raise awareness for the visually impaired community.

“Skateboarding is an escape for me, almost like meditation; it just frees my brain,” says Justin. “I want to give everything I have back to skateboarding because it saved my life.”