Jumping into an Uncharted Arena

Thirty-one-year-old Wren Blae Zimmerman always loved horses. But it wasn’t until a few years ago that Wren finally learned to ride. Now her life revolves around this equestrian dream, and she’s given herself the title of the “Blind Show Jumper.”

Wren has worn glasses since second grade, but it wasn’t until high school that she started noticing problems seeing the board in class. When her regular eye doctor was unable to correct her vision, Wren was sent to several ophthalmologists and retina specialists who, after multiple tests, diagnosed her with Stargardt disease at the age of 17. 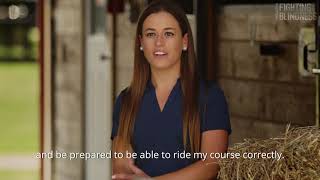 Over the next few years, Wren lost more of her central vision. She was pronounced legally blind halfway through college. The reality of Wren’s situation began to set in, and she began to appreciate the importance of her happiness.

“Focusing on my quality of life has been really important in coping with my diagnosis,” says Wren. “I’ve learned that it’s OK to put yourself and your wants first. Just because you have a diagnosis like Stargardt doesn’t mean you have to stop doing what you love.”

Many people have told me that riding horses and competing like I am is literally impossible. But I’m doing it, and well, so anything is possible.

At twenty-four Wren started taking horseback riding lessons at a therapeutic riding center in exchange for helping with the program. She then put everything on hold to pursue her lifelong dream of learning to jump horses.

Wren’s instructor told her she would never be able to jump or control a horse due to her vision impairment. Undeterred, Wren continued to search for a trainer, and after being turned down by several, she finally found a trainer who took her from never having jumped an entire course to successfully competing against riders with 100% of vision. Within four years, Wren was on the same level as lifelong riders in shows at the 1.00-meter jumper level.

“Many people have told me that riding horses and competing like I am is literally impossible,” says Wren. “But I’m doing it and well, so anything is possible.”

Wren recently relocated to Lexington, Kentucky, where she can focus full-time on riding. Private donors and grants cover her training and competition fees, and she recently bought her own horse, Cassicasca (also known by his barn name, Valentine).

The strategy Wren has to take to prepare for a horse jumping show is much different and more intense than her competitors.

A typical show lasts four or five days and the position of jumps change every day. Each morning of competition, Wren goes into the arena with an aide, walks the perimeter, and stands by each jump, asking questions so she can get an idea of the space and the surroundings to make what she calls a “mental map.”

Next, Wren goes to the course posting, which is a simple piece of paper, where her aide will transcribe the course to a large white board so that Wren can see it and memorize. Wren then goes back to the arena to walk out the course she has memorized and counts out the number of strides between each jump. This whole process usually takes Wren about two hours before the show even begins, while other riders can just go look at the course and then compete.

Wren also wears a Bluetooth earpiece for her trainer to instruct her on turns and how she’s looking throughout the show.

“People will see me ride and it’s only after my show that they say to me, “Wait, you’re blind?” Wren recalls. “I love that I can be a part of this movement to make people realize, yes, I’m visually impaired, and I can ride horses, too.”

Wren is the only blind and visually impaired person in United States who is competing at this jump level, with the goals of making the United States Equestrian Federation (USEF) Show Jumping Ranking List, becoming the first blind show jumper to compete at the top level, and eventually competing in the Paralympic Games.

Wren is advocating for the sport of jumping to become a Paralympic discipline and hopes that her endeavors will inspire and encourage interest, acceptance, and development of the sport of para-show jumping.

“Riding has given me back my confidence and a sense of independence that I thought I’d never have or feel again,” says Wren. “This sport has allowed me to look forward, to dream, and to hope again.”

Wren is an inspiration to children with vision impairments who reach out to her on social media. Many of them have also been told they couldn’t do something because of their disability. Wren tells them they should stop at nothing.

“I’ve come to realize that my diagnosis has opened up doors for me to help others,” says Wren. “My hope is that I can change society’s perception about people who are blind and visually impaired and show that we can do anything.”

If you’d like to learn more about Wren and help support her journey, visit: www.wrenblae.com