Michael was matched with his first guide dog, Geo, a yellow Labrador retriever, in March 2020, two years after he applied with Guiding Eyes for the Blind. Michael and Geo now have a relationship unlike any other. 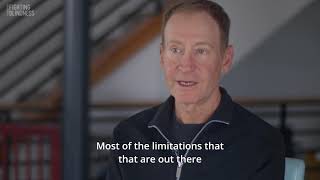 Foundation Fighting Blindness National Trustee, Michael Stone recalls struggling with his vision for his whole life. Michael was misdiagnosed with cone-rod dystrophy at the age of 35, but years later, he eventually had genetic testing to confirm his proper diagnosis of X-linked retinitis pigmentosa.

As a child, Michael strayed away from sports, fearing that he’d get injured from not seeing well. But now 51 years old, Michael lives in Boulder, Colorado, where he moved many years ago for his rock-climbing passion and appreciation of the outdoors. Michael is an avid athlete, competing in more than 200 races, including 17 Ironman triathlons, over the last 20 years. So, when it was recommended that Michael get a guide dog, he didn’t feel like he needed one.

“I didn’t want to take a guide dog away from someone who really needed it,” says Michael. “But once I got my guide dog, I finally realized how much stress I was under trying to navigate the world by myself.”

Michael was matched with his guide dog, Geo, a yellow Labrador retriever, in March 2020, two years after he applied with Guiding Eyes for the Blind. Michael knew he wanted a dog from Guiding Eyes Running Guides program and was told it could take a long time to match with the right dog, as only a small percentage of dogs can pass the guide dog and running training as well. But the timing was perfect for Michael.

“I was so worried I was going to mess up a guide dog because I thought I still could see pretty well, and I didn’t know if I could really let them guide me,” says Michael. “But right after I got Geo, my sight dramatically declined, and it all fell into place.”

As a puppy, Geo was raised by a family in Maryland. Geo then went to New York, where Guiding Eyes for the Blind is headquartered, for her formal guide dog training. At two years old, Geo graduated and was ready to work with her match, Michael.

Having a guide dog will give you independence that you didn’t even know you could achieve.

Michael and Geo completed their training together with a Guiding Eyes field instructor in Colorado, fortunately, a few days before the COVID-19 shut down. Michael’s predominant feeling during training was nervousness.

Today, Michael and Geo walk at an average pace of 4.3 mph. Michael has also had to relearn how to run with having Geo along his side. She wears a nylon harness used for running and better mobility. Overall, the most challenging part for Michael has been learning to trust in her, work together, and let go.

“It’s a guide dog love language,” says Michael. “For so long, I’ve taught myself to just avoid certain things that are hard, but when you have a guide dog, they are there to help you conquer those fears. I now realize I have a companion to deal with these anxieties and to help with the more devastating effects of losing your sight.”

Now that Michael has experienced having Geo by his side for several months, he advises that before getting a guide dog, you must first check in with yourself.

“It’s so important to accept your vision loss first,” says Michael. “If navigating the world is terrifying and preventing you from going out and being yourself, it’s a great time to look into a guide dog. If you’re at the point that you’re ready to let go, a guide dog will absolutely be a wonderful addition to your life.”

“Having a guide dog will give you independence that you didn’t even know you could achieve,” says Michael. “When your dog pulls you out of harm’s way, you will want to hug them and never let go. It’s an illuminating feeling to have a four-legged wonder by your side.”

Michael is so appreciative of the sacrifices made for these guide dogs to become fully trained and ready for their work. Geo’s puppy raiser kept a photo album that documented her journey from day one through her graduation, which Michael has valued greatly. Michael wants to honor all the hard work that went into training Geo and feels so much gratitude to all the guide dog puppy raisers and trainers.

When Geo’s harness is off, and she’s “off-duty,” Michael says she’s like any other fun-loving dog. Every night, when Michael goes to bed, all 62 pounds of Geo flops onto him, giving him a hug goodnight.

“The bond you share with your guide dog is like nothing you’ll ever experience with any other relationship,” says Michael. “Having a guide dog will give you new life. You will know it when you get there, but the word “forward” will most definitely have new meaning.”