Flight4Sight: A Man with Usher Syndrome Travels Around the Globe

There’s nothing like a sense of urgency to turn what seems like a crazy idea into reality.

There’s nothing like a sense of urgency to turn what seems like a crazy idea into reality. That’s what happened to Mike Walsh in January, when he decided to make exceptional use of a pass a friend who’s a Delta flight attendant had provided him before it ran out. She was compelled to do so because Mike, who’s the son of David Walsh, a member of FFB’s board of directors, has Usher syndrome, which affects both his hearing and his vision.

“I’ve had hearing aids since I was a kid, but I’ve been pretty passive about my vision loss because it’s happened very gradually,” says Mike. “But a couple years ago, when I turned 35, I had to give up driving. So now it’s a reality. And I wanted to see and do some awesome stuff with the eyesight I still have.”

So Mike—a former professional sports mascot who’s career is now focused on social media—launched Flight4Sight, a personal campaign to see as much of the world as possible over the next two months, his destinations suggested by people following his trek on Facebook. With cane in hand, and #flight4sight stitched across his cap, he did just that, taking 24 flights to 13 countries on six continents in 54 days.

“The last thing I want to do is get in a moving vehicle of any kind,” Mike now says from his apartment in Madison, Wisconsin. “But I do have a lot material to sift through. I did a lot of interviews, which I just transcribed, so I have blog posts to write.”

He’s posted a few already—like a Q&A with legally blind Dancing with the Stars contestant Brilynn Rakes, whom he met during a stopover in New York City; and his first post from abroad, recounting his canyon swing, paragliding and zip-line adventures in New Zealand.

“What happened there was fascinating,” Mike recalls. “I got to New Zealand, and that first night—which was morning here in the States—I posted 10 different activities to choose from. When I woke up, those were the top three. Then things snowballed. The canyon-swing place saw what I was doing and gave me the second ride free, along with pictures and videos (see below). Then the zip-line place told me I’d have free admission. It was covered in one of the local newspapers. They all wanted to help my campaign.” 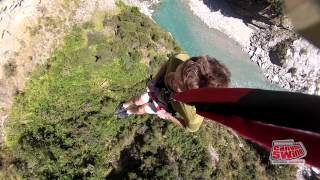 Mike didn’t strictly adhere to his most-popular-picks rule, however. One day, he got a Facebook message from one of his sisters’ friends, “someone who works for USAID in Ethiopia,” Mike says. “He told me he could set me up with blindness-related charities. So I said to myself, ‘There’s no way I can pass this up.’”

Over four days, Mike visited four organizations, including a school for the blind which can’t afford canes or updated computer software for its students. He recently posted a blog account of his Ethiopia visit and provides a series of photos on Flight4Sight’s Facebook page.

Other stops along the way included Italy, Chile, Thailand, and Austin, Texas—for the annual South by Southwest conference in mid-March. “I’m a tech kind of guy, and I’ve always wanted to attend,” Mike says of the renowned music, tech and film gathering. “I didn’t present; I was there to learn.”

What he took from that conference he’ll be applying to his ongoing campaign, which, aside from posts on his blog site, may eventually morph into a fundraising effort. “My idea is to take what I’ve done, and the social-media skills I’ve acquired, and somehow crowd-source in ways that will raise money,” Mike says. “I really want to give back. It would be great to return to that school in Ethiopia with canes. And, of course, I want to make people aware of what the Foundation Fighting Blindness is doing, and help raise funds for retinal research.”

There’s one other motivating factor, explained in a blog post about his younger brother, Johnny, who’s an attorney and standup comedian in Madison. He also has Usher syndrome. In the post, Mike writes: “On this trip, I wanted to dig deeper. I wanted to learn more about my brother and the condition we both share.”