Retinitis pigmentosa (RP) runs in Charlie Kramer’s family, so it wasn’t a surprise when he was diagnosed at a young age. But now, at 29 years old, Charlie is following his passion for helping and empowering others as a full-time life coach for those with disabilities. 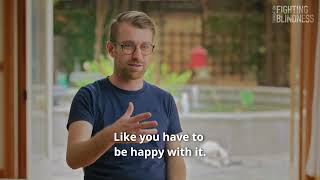 29-year-old Charlie Kramer is well-known as a life coach, public speaker, and for his work as an advocate for the disabled community on social media. But until a few years ago, Charlie didn’t want to openly share his journey with vision loss.

Charlie was diagnosed with retinitis pigmentosa (RP) at just five years old. At first, Charlie didn’t notice he was seeing any differently than his friends until around middle school. As Charlie’s sight continued to deteriorate, at 16 years old, he went through mobility training and received a white cane, but he only used it if he was in a public place with large crowds, like Disney or a concert. He would bump into his classmates walking through the hallways at school, but he never thought or wanted to use a white cane.

Charlie’s mom, Colette, also has RP and has been involved with the Los Angeles Foundation Fighting Blindness Chapter for over 30 years. Colette volunteered the Kramer family to become the first Family Chair for the Los Angeles VisionWalk about 16 years ago, and the whole family has participated every year since.

“It’s important to our family to be present and advocate for those in our community,” says Charlie. “The Foundation and VisionWalk are so important in our lives. It’s always been helpful for me to be exposed to others with vision loss, even if I haven’t always been open about it myself.”

Charlie’s true passion in life has always been helping and empowering others. In the last few years, Charlie has developed programs to help people work through their own personal journey with their disability. Now, Charlie’s a full-time life coach for those with disabilities, and he also works with businesses, schools, and organizations to help them learn how to best include people with disabilities.

“My career taking off has really given me the ability to look at my vision loss as a tool to help people,” says Charlie. “When I was younger, I wasn’t accepting of who I was, and I was pushing my RP to the side. But in 2019, it was almost like coming out of the closet for me. It transformed my life, career, and impact on the world and now I feel more comfortable in my own skin.”

In addition to helping others, Charlie also has a passion for sharing his story through music. In January 2019, Charlie created a musical experience called Singing in the Dark, performing at conferences and synagogues across the country.

“I think everyone can be blind to something,” says Charlie. “Singing in the Dark is an opportunity to not only raise awareness for the visually impaired community but for people to open up and accept what they might be blind to in their lives, whether that’s physical, mental or spiritual.”

“For so long, I was hesitant to do what I really wanted because I was afraid that I wouldn’t be able to achieve it while having RP,” says Charlie. “But I work my butt off and live my dream every day. I may have to do things a little differently, but I can still do anything, and so can anyone.”