Join us on Saturday, January 23rd, 2021, at 12:00 pm EST for a webinar featuring a discussion of how gene therapies can be used to address retinal degenerative diseases, as well as the latest updates on gene therapy research and clinical trials.

Allison Corona is one of 40 people with Leber congenital amaurosis who’ve benefitted from a gene therapy clinical trial.

Growing up, Allison Corona could see shapes and silhouettes, but not the faces of loved ones clearly enough to know if they were happy or sad. She needed a cane to navigate her schools’ hallways. And in a dark room, or outside at night, she was completely blind. “It was like living a half-life,” Allison, 22, recalls in a new FFB video, “Restoring Sight, One Treatment at a Time.”

But as the title indicates, that half-life has passed. More than a year ago, the Long Island resident participated in a gene therapy clinical trial at Children’s Hospital of Philadelphia made possible by the Foundation. Almost immediately, she began seeing details once prohibited by her vision loss. The moon peeking from behind clouds, for example. Signs in the New York City subway. Her parents’ faces. 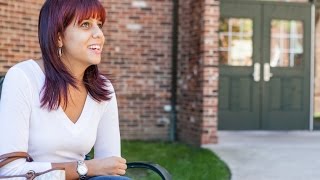 Allison is one of 40 people with Leber congenital amaurosis who’ve benefitted from the gene therapy, which, in its final stage of testing, will next be up for approval by the U.S. Food and Drug Administration. But, as Allison points out, millions of people affected by other retinal diseases are patiently waiting for their treatments to become available.

In the video, a retinal specialist and an FFB donor make one thing clear—the best way to ensure that cutting-edge treatments (including those for gene, stem-cell and drug therapies) get into clinical trials is through the Foundation. It was, after all, FFB-funded researchers who conducted the pre-clinical and early-clinical-trial work that preceded Allison’s treatment. And those funds, of course, wouldn’t have been possible without donors.

Hence the reason Allison says in the video, “A person’s donation can change someone’s life