Today only, every dollar you give to the Foundation Fighting Blindness will be multiplied five times — up to $50,000!

Thank you for helping us celebrate #GivingTuesday — and for supporting our mission every day.

YouTuber Sam Seavey was diagnosed with Stargardt disease when he was just 11 years old. Sam didn’t fully accept his visual impairments until his early 30s. Now he’s helping others through “The Blind Life,” which is currently the most extensive resource for assistive technology on the internet. 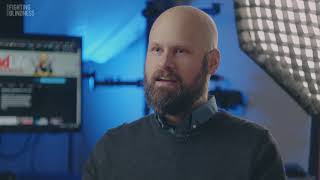 Sam Seavey is a husband and dad of two children living in Kentucky. Sam’s also a well-known YouTuber in the blind and visually impaired community. Sam began his YouTube channel to share his visually impaired perspective on life, but he wasn’t always so open and candid about his vision loss.

Losing your vision makes you gain a deeper appreciation of your life. Especially if you have a degenerative eye disease, because you don’t know how many more sunsets you’ll see, so I better enjoy this one.

Sam was diagnosed with Stargardt disease when he was just 11 years old, shortly after his older sister was also diagnosed with Stargardt. Having someone close that could understand how it felt to be losing your sight was helpful for Sam to cope. And his parents were very accepting and wanted to help him and his sister as much as they possibly could.

Sam felt like a typical kid outside of school, but in school, Sam often felt like he struggled to fit in.

“You don’t want to be the different kid, you want to be like everyone else,” says Sam. “But it’s hard to do that when you’re the one sitting in the front row of the classroom with the large print books and a monocular trying to see what the teacher is doing.”

Sam attended public school through most of high school and recalled pretending he could see so his peers wouldn’t know he was blind. But between his junior and senior years, he attended a life-changing summer program at Governor Morehead School for the Blind in Raleigh, North Carolina, and graduated from the school.

“I finally felt normal in school my senior year,” says Sam. “I wasn’t the weird kid anymore. I was finally around others that were like me, and I loved it.”

Around Sam’s late 20s to early 30s, he finally started to feel self-assured and accepting of his visual impairments. He credits a lot of that confidence to his wife, Rachel.

“I finally realized there’s nothing I can do about it, and it’s not going to change, right now, at least,” recalls Sam. “I was wasting too much time and energy pretending to be sighted when I wasn’t, and I wasn’t fooling anyone.”

Everyone in his family, including himself, feels more empathetic and more willing to help others because of his experiences with vision loss.

“Losing your vision makes you gain a deeper appreciation of your life,” says Sam. “Especially if you have a degenerative eye disease, because you don’t know how many more sunsets you’ll see, so I better enjoy this one.”

As Sam’s vision loss progressed over the years, employment grew more difficult to find. So, when his daughter was born, he stayed home with her while his wife worked. But once his daughter grew old enough to go off to school, he figured he needed to start doing something with his time.

In 2012, Sam was hired to create videos for a mobile technology YouTube channel. He added a few videos specifically about accessibility apps and features for people with low vision and received a lot of positive feedback. He did some searches and realized there weren’t any resources on YouTube for those with Stargardt disease. This encouraged Sam to start his own YouTube channel in December 2013, which was dedicated to sharing his honest experiences living with vision loss.

In the beginning, the channel’s content was just whatever came to Sam’s mind. Sam started the channel with the name The Blind Spot, as an homage to the vision impairments he experiences and because it’s a literal spot on the internet that people can come to learn about vision loss. But as the channel has progressed, he’s narrowed down the content, focusing mostly on assistive technology and community-driven requests. As a member of many low vision Facebook groups, Sam will often read about other’s interests in a specific topic or product. He’ll then reach out to the company to share his platform and collaborate with them for a video. So, a couple of years ago, he renamed the channel The Blind Life, which better represents the well-rounded video content about living, adapting, and thriving with vision loss.

“The Blind Life is a representation of what is going on in my life and what I enjoy, all from a visually impaired perspective,” says Sam. “I’m a big fan of mobile technology and low vision accessibility, but I enjoy also highlighting the humorous side of living with low vision, while still sharing tips and tricks I’ve learned from the last 30+ years.”

The Blind Life is currently the largest resource for assistive technology on the internet, with over 24,300 subscribers and over 570 videos. Sam produces everything on the YouTube channel himself, including the editing of each video. He uploads a new video to the channel every Saturday morning.

Now 44 years old, Sam can reflect on his life so far and realize his vision loss is “not the end of the world.” He wants to share this with others in the blind and visually impaired community that may not have had their “aha” moment yet.

“When you’re first diagnosed, it’s very scary,” says Sam. “There are many stages of grieving that you go through, but in the end, it’s going to be OK. You’re going to be able to do everything you want and need to, you just may need to learn a new way of doing it. I hope I can help you navigate through that and live your life to the fullest.”

This Beacon Story is brought to you in partnership with Genentech, a member of the Roche Group.