Beverley is a go-getter who does not let her Stargardt disease get in the way of living her life to the fullest. When Beverley isn’t hard at work as an entrepreneur, she enjoys spending time with friends, her dog, Loki, and is also an active leader of the Foundation’s Boston Chapter. 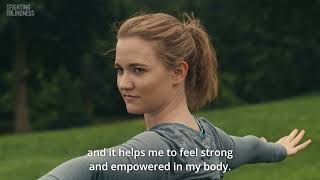 Beverley Barnes grew up in Colorado until she was 12 years old and then moved to Florida. This year stands out in Beverley’s mind, as it was the year she also started losing her vision to Stargardt disease.

Beverley started noticing she couldn’t see the board well at school, so her parents took her to an optometrist who sent her home with glasses. But after about six months of no improvement, Beverley’s parents took her to an ophthalmologist who noticed spots on her retinas, then sent her to a retina specialist. After many tests, the retina specialist pointed out the characteristic yellowish flecks in her RPE, diagnosing her with Stargardt disease caused by mutations in the ABCA4 gene.

At that time, Beverley and her parents had never heard of Stargardt disease before, but once they all started to learn more about the condition, the diagnosis became less scary. Many years later, Beverley’s two younger sisters also began to experience vision loss, both in their 20s, and were diagnosed with Stargardt as well.

“My sisters are a nice support system and a sounding board,” says Beverley. “If one of us finds a different way of doing something, we can talk about it, or we can vent about something that feels like a roadblock one day, and then we move on. It’s also been great to see how they’ve come up with ways of adapting their lives that are different from how I’ve adapted mine.”

Although Beverley has her sisters to confide in, having a community of others with blinding retinal diseases like hers has been important not just to Beverley but for her whole family.

“It’s a joy and relief when you meet someone else with your disease,” says Beverley. “I didn’t think that meeting somebody else with Stargardt was going to be very important to me until I met a friend of a friend who also has Stargardt, and we connected on so many different levels. She had so many of the same experiences that I had, and in many ways, talking with her helped me maintain my confidence in pursuing and charting my own path.”

In wanting to learn everything she could about Stargardt, Beverley found the Foundation Fighting Blindness, which has helped her to become more educated and keep up with ongoing research. Beverley is now the revenue chair of the Foundation’s Boston Chapter.

“I’ve been involved with the Foundation because I think what they’re doing in terms of raising money and supporting important research is amazing,” says Beverley. “It’s wonderful to be a part of the leadership for the Boston Chapter. I feel like a lot of these people I wouldn’t have crossed paths with had I not become involved with the Foundation.”

Early on in Beverley’s journey with Stargardt, she looked into accessibility devices and things that might make her life easier. But in the end, she found most of them made things harder for her, so she learned to adapt herself, finding more efficient solutions on her own. Beverley mainly uses her iPhone and says it’s the best accessibility device for her.

“I never really tried to adjust what I thought or how I thought I should be doing things because of my diagnosis,” says Beverley. “I never felt like my Stargardt held me back or that I had to overcome it. I was already ambitious and an overachiever.”

Beverley continues to be a go-getter, moving to many different parts of the U.S. for work and even living in Paris for a year to earn her MBA, traveling across Europe and the Middle East to nearly thirty other cities while she was there. Now 34 years old, Beverley resides in Boston, Massachusetts, with her husband Vass and is an entrepreneur working on strategy and operations for a startup company.

When she’s not hard at work, Beverley enjoys spending time with her yellow lab mix dog, Loki, at the park. Beverley is also passionate about health and nutrition. She loves to cook, rarely making the same dish twice, and at the end of the day, she winds down with yoga or Pilates.

“I haven't let my vision loss be a limitation for me in my career or in being an entrepreneur, and I won't let it in the future,” says Beverley. “I hope that other people with Stargardt and with other visual impairments realize that this does not have to hold them back either, regardless of what they want to pursue in their careers or lives.”