In honor of October’s Blindness Awareness Month, we are asking individuals to share their personal vision loss stories through our #ShareYourVision campaign. As you think about your story and how you would like to share it, check out these recent stories that have been added to the Share Your Vision website gallery.

What Exactly Is Gene Therapy?

What exactly is gene therapy, and how does it work?

Gene therapy is one of the most promising areas of research in the drive to save and restore vision for people with inherited retinal diseases. Thanks to years of critical Foundation funding, gene therapies in clinical trials are restoring vision in children and young adults with Leber congenital amaurosis, and about a dozen gene therapy clinical trials have been launched recently for a variety of conditions, including Stargardt disease, Usher syndrome, choroideremia, retinitis pigmentosa, and age-related macular degeneration.

Admittedly, gene therapy can be a difficult concept to wrap one’s head around. It was for me when I was first introduced to it. So, what exactly is gene therapy, and how does it work?

What follows is a two-part answer. The first part is a basic description of gene therapy, the second a video clip of William Hauswirth, Ph.D., a Foundation-funded researcher at the University Florida. He is also one of the world’s most prolific developers of gene delivery systems for retinal conditions and a recent recipient of the Foundation’s most prestigious research honor, the Llura Liggett Gund Award.

Virtually every cell in our bodies carries a complete set of an estimated 20,000 genes. Genesare like our body’s instruction manual. They instruct our cells which proteins to make. These proteins are essential to the health and functioning of all cells.

Most inherited retinal degenerative diseases are caused by a small variation, or mutation, in a single gene. These variations are like misspellings in our instruction manual. Even a minor one can cause the wrong protein or amount of protein to be made. That can lead to serious consequences, like degeneration of the retinal cells that enable us to see.

Scientists are developing gene therapies to deliver copies of new, corrective genes, without the misspellings, to the cells in our retina, enabling them to make the right proteins, and stay healthy and function properly. Specially designed viruses are commonly used to deliver the corrective gene copies to the cells. The viruses are said to “transfect” — or penetrate — the cells with their therapeutic genetic cargo.

Gene therapy is administered by injecting a tiny drop of liquid — which contains the virus and new gene copies — underneath or near the retina. The solution is absorbed into the retina over a period of hours.

The elegance of gene therapy is that one treatment can potentially be effective for several years or perhaps a lifetime.

What’s just been described is known as replacement or corrective gene therapy. Gene therapies are also being developed to preserve retinal cells, independent of the underlying genetic defect causing disease. In addition, optogenetic therapies can bring light sensitivity (i.e., visual function) to retinal cells that are normally not light sensitive, but survive in advanced retinal diseases 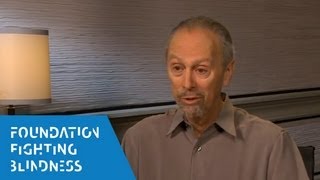