At VISIONS 2016, FFB’s national conference, the Foundation honored him with its Ed Gollob Board of Directors Award for breakthrough research conducted within the past year. 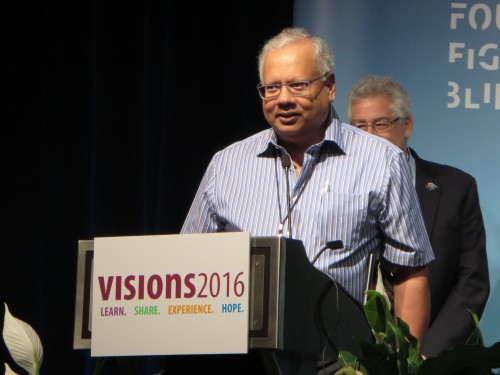 Inherited retinal conditions such as Stargardt disease and retinitis pigmentosa (RP) run in families. The diseases in some families span several generations with dozens of affected members. In other cases, a disease may only affect one or more siblings within a single generation. Researchers have understood the nature of these different inheritance patterns fairly well for several decades.

But what has perplexed scientists for a long time is that two family members — for example, brother and sister — can have a retinal disease like RP caused by the same genetic defect, but have very different levels of vision. One sibling may experience little vision loss throughout his or her lifetime (e.g., 80 years) whereas another may be virtually blind by 40 years of age. While genetic experts have had theories about why this variation is relatively common, Shomi Bhattacharya, Ph.D., professor emeritus at University College London, identified the reason in people with RP caused by mutations in the gene PRPF31 — a reason that is likely to explain at least some of the vision-loss variation for other forms of RP and perhaps other retinal diseases. At VISIONS 2016, FFB's national conference, the Foundation honored him with its Ed Gollob Board of Directors Award for breakthrough research conducted within the past year. Dr. Bhattacharya discovered a small piece of code within a region of a gene known as the promoter. In simple terms, genes express proteins, which are essential for the health and function of all cells in the body, including those of the retina. The promoter is like a gene's gas pedal; it controls how much protein is made. Dr. Bhattacharya found that in people with RP caused by PRPF31 mutations, vision loss strongly correlated with this small coding sequence in the promoter. Certain sequences led to better gas pedals and, therefore, more protein and better vision. Other sequences led to weaker gas pedals, less protein and worse vision. This discovery not only leads to a better understanding of vision-loss variation; it might also give researchers new targets for vision-saving treatments. Over the years, our honoree has had an enormous impact on the retinal-genetics field. During his career, Dr. Bhattacharya has, thus far, identified 25 novel loci and genes for inherited eye diseases, including those for retinitis pigmentosa. These RP genes include: NRL, PRPF31, PRPF3, PRPF8, CRB1, AIPL1, TOPORS, and EYS. I'm sure there are many Foundation supporters, and perhaps readers of this post, who have a retinal disease caused by a mutated gene he helped identify. Pictured, top: Dr. Shomi Bhattacharya expresses his gratitude for being awarded theEd Gollob Board of Directors Award.