An exciting year in fighting blindness.

This is Ben Shaberman, director of science communications, at the Foundation Fighting Blindness (FFB), and I'm pleased to present a quick overview of some of the exciting research advances for inherited retinal diseases made during 2017. It has been an exciting year with several promising therapies moving into and through clinical trials.

Without a doubt, the FDA's approval of Spark Therapeutics' gene therapy for Leber congenital amaurosis and retinitis pigmentosa caused by mutations in the gene RPE65 is one of the greatest achievements ever made in eye research. Known as LUXTURNA‰ã¢, the gene therapy has enabled patients with severe vision loss to put away their canes, read print, and even see stars in the sky. LUXUTRNA is the first FDA-approved gene therapy for the eye or an inherited condition. The treatment was made possible by two decades of earlier research funded by FFB. \ 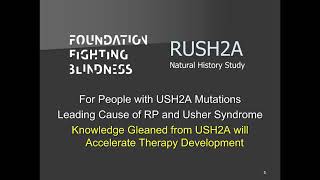 We are also pleased by encouraging progress in stem-cell research. The company jCyte reported that its retinal progenitors — these are stem cells that have nearly developed into photoreceptors — performed safely in its Phase 1/2a clinical trial for people with retinitis pigmentosa. There was also evidence the cells were saving vision for people receiving the highest dose of the treatment. jCyte's therapy is designed to work independent of the mutated gene causing RP and may be beneficial to people with other retinal conditions.

X-linked retinitis pigmentosa is a relatively prevalent and aggressive retinal condition affecting primarily males. Mutations in the gene RPGR are the leading cause of X-linked RP. But for those affected, there is great hope for a treatment to save and possibly restore vision from this form of RP. Three companies have launched, or will soon launch, gene therapy clinical trials for XLRP: AGTC in the U.S. and MeiraGTx and Nightstar in the UK. FFB funded earlier lab research in canines that provided strong evidence that gene therapy was an effective approach for treating XLRP.

In 2017, FFB also launched a natural history study called RUSH2A for people with mutations in the gene USH2A. Defects in USH2A are a leading cause of Usher syndrome type 2A, which causes both hearing and vision loss, as well as retinitis pigmentosa without hearing loss. The goal of the four-year study is to better understand how vision loss progresses in people with USH2A mutations, so we can better design clinical trials for USH2A treatments. The data and knowledge gleaned from RUSH2A should ultimately get more companies interested in developing USH2A treatments.

In 2017, FFB announced up to $7.5 million in funding for Nacuity, a start-up company in Dallas developing a drug with vision-saving potential for RP and potentially other retinal conditions. Known as NACA, the cross-cutting drug is a strong antioxidant that performed well in lab studies at Johns Hopkins. Nacuity plans to launch a clinical trial for NACA in 2018.

Another emerging, cross-cutting therapy is being developed by the company SparingVision in France. It is a protein known as rod-derived cone viability factor (or RdCVF), which has shown promise for saving vision in people with RP and other related retinal conditions. RdCVF has been in development for more than a decade. FFB is investing up to 7 million euros in SparingVision, which plans to launch a clinical trial in 2018.

Keep in mind that I've only covered a few highlights in this overview — there are many more emerging therapies in development for a variety of inherited retinal conditions. In fact there are about 25 clinical trials underway for therapies for RP, Stargardt disease, retinoschisis, Usher syndrome, LCA, and achromatopsia. Dozens more are underway for the dry and wet forms of age-related macular degeneration. In addition, FFB is currently funding nearly 80 projects at prominent research institutions around the world.

To learn more about the research advances in this overview and other great research efforts underway for retinal diseases, check out other entries in the Eye on the Cure blog and visit the main FFB website, www.FightBlindness.org.

And, make sure you register at www.MyRetinaTracker.org — FFB's free and secure global patient registry — to help researchers better understand retinal diseases. The benefits of My Retina Tracker also include notifications of forthcoming clinical trials, FFB's genetic testing program, and other studies.

Thank you for your generous support of sight-saving research and have a great 2018.