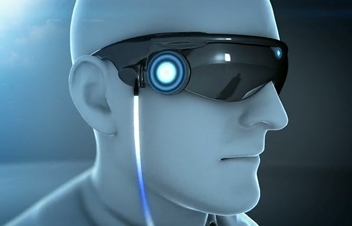 While these two devices were in the media spotlight, a French retinal implant developer called Pixium quietly launched a clinical trial for its Intelligent Retinal Implant System 1 (IRIS1) in France, Austria and Germany. The company also recently received $20 million in venture-capital funding to boost advancement of the device. A video on Pixium's website provides a nice overview of the company and its IRIS technologies. To see it, click on the image below:

In 2011, Pixium was spun off from the Institut de la Vision and Univeristé Pierre et Marie Curie. You might recognize the name of one of its co-founders, José Sahel, M.D. He's funded by the Foundation for a number of highly promising research projects, including the development of optogenetic and vision-preserving gene therapies.

The IRIS1 consists of a small implant attached to the inner layer of the retina, a camera mounted on a pair of glasses and a pocket computer for image processing. The camera receives images that are processed, then sent to the implant, which converts them into electrical signals that are routed back to the brain, where they are interpreted as vision. The IRIS1 is designed to produce images of 150 pixels.

In future generations of the IRIS, advanced camera technology will capture and process images more like the human eye does. Likewise, the implant will produce higher-resolution visual information from those images, so the brain can create a more detailed and natural visual experience for the user.

The IRIS2 is being developed to produce 300-pixel images, and the IRIS3 5,000-pixel images, which Pixium researchers believe is more than enough for users to recognize faces and navigate new environments. Clinical trials for the IRIS2 and IRIS3 are expected to begin in 2014 and 2015, respectively.

Initial results for the IRIS1 human study are expected in 2014. Stay tuned to the Foundation's website for an update.