Much of the information and data shared during the meeting came out of ProgSTAR, the FFB-CRI-funded natural history study of 365 Stargardt disease patients. 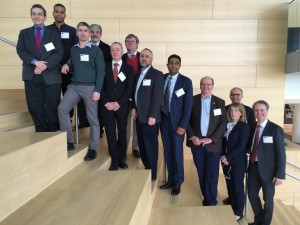 "The pharmaceutical industry, including start-ups and established companies, is very interested in our Stargardt disease conference, because we bring together all players. We are a transparent source of invaluable information," said Patricia Zilliox, PhD, chief drug development officer at FFB-CRI. "We plan to publish an overview of the meeting, so the information and outcomes are available to all industry and research academia. Our goal is to move the entire field forward." Artur Cideciyan, PhD, a researcher at the University of Pennsylvania and a ProgSTAR investigator, delivered a comprehensive opening overview of Stargardt disease, which is most frequently caused by mutations in the ABCA4 gene. In simple terms, Stargardt disease is a waste management problem. Dr. Cideciyan said that the condition's hallmark is the accumulation of toxic deposits called lipofuscin in a layer of support cells called the retinal pigment epithelium (RPE). The RPE provides essential nutrition and waste management for photoreceptors, the cells that make vision possible. When the RPE degenerates from the build-up of lipofuscin, photoreceptors and vision are lost. Dr. Cideciyan noted that the disease begins at or near the very center of the retina, known as the fovea. Over time, the region of degeneration expands outward — that is, the patient's blind spot becomes bigger. The variation in disease onset makes therapy development challenging, especially the design of human studies and selection of participants to demonstrate that an emerging treatment is slowing or halting disease progress. Dr. Cideciyan's research has revealed that for many patients, vision remains stable for many years before a sudden steep drop off when degeneration accelerates and vision loss increases rapidly. Philip Rosenfeld, MD, PhD, at Bascom Palmer, University of Miami, presented a drug called emixustat from Acucela, which is designed to reduce lipofuscin accumulation and preserve vision by slowing the visual cycle, the processing of vitamin A in the retina that makes vision possible. Vitamin A is like the fuel for the process å_ lipofuscin is the unwanted byproduct. In a clinical trial for people with the dry form of age-related macular degeneration (AMD), Acucela's drug didn't appear to slow the disease process. While AMD is caused in part by waste accumulation in the retina, many genetic and lifestyle factors are involved in the complex disease. Investigators therefore hypothesize that slowing the visual cycle may not be enough to save vision in dry AMD patients. However, Acucela believes that Stargardt disease may be a better target for the treatment and is launching a clinical trial of its treatment for Stargardt patients. The good news from the emixustat clinical trial for dry AMD was that tests of patients revealed that the oral drug was likely getting to the retina, where it was needed. Unfortunately, it didn't have an observable effect on the disease. "There's no such thing as a failed study," said Dr. Rosenfeld. "We always learn something." Ilyas Washington, PhD, from Columbia University and scientific founder at Alkeus, presented his company's promising approach to reducing lipofuscin accumulation, i.e., managing the waste management problem. Alkeus's emerging therapy, ALK-001, is a modified form of vitamin A, which, when metabolized in the retina, results in much less waste. Scientists developed ALK-001 by replacing hydrogen atoms in vitamin A with deuterium. Known as deuterated vitamin A, it "burns cleaner" than the natural form. Deuterium is a safe, naturally occurring, non-radioactive form of hydrogen that is present in the human body. ALK-001 is now in a Phase II clinical in Stargardt disease. As other meeting presenters discussed, the list of potential treatments includes gene and stem-cell therapies and a variety of pharmacological approaches. However, the challenge is that not everything is going to work. And even those treatments that do work won't help everyone affected; multiple approaches may be needed to save vision of all patients. "I am confident our meeting achieved the goal of sharing knowledge so that researchers and drug developers are better equipped to address the needs of patients with Stargardt disease," said Hendrik Scholl, MD, ProgSTAR principal investigator at the University of Basel and Johns Hopkins University. "That is an important focus for the Foundation and the scientific community. We will continue to bring key players together to collaborate so that we can more quickly and effectively get vision-saving therapies out to the people who need them."