Robots aren’t taking over — at least not yet — but they are assisting in trials for delicate retinal surgeries.

The potential benefits of robot-assisted subretinal injections include: eliminating the hand tremors of the human surgeon, increasing precision and accuracy, and reducing the potential injury to delicate retinal tissue. 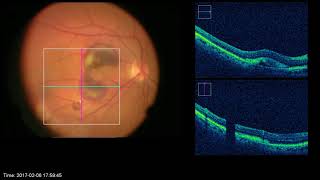 In the accompanying video, a Preceyes robot is used in a clinical trial to inject an anti-clotting agent underneath the retina of a patient with a subretinal hemorrhage caused by wet age-related macular degeneration (AMD).

The video image on the left provides a front view of the retina during the procedure. The two dark kidney-shaped spots in the middle of the orange disc are the areas of hemorrhage. While difficult to see, the injection needle appears in the lower left region of the image. As the video plays, the needle releases a tiny bubble (bleb) of the anti-clotting agent underneath the retina.

The side view of the retina, appearing on the right in the video, is captured by an imaging technology known as optical coherence tomography (OCT). It shows the bubble from the agent forming underneath the retina.

The video is from a clinical trial of the Preceyes robot underway at Oxford University Hospital in the UK. The study is led by Robert MacLaren, MD, PhD, who is also leading gene therapy clinical trials for choroideremia, X-linked retinitis pigmentosa, and dry AMD. Thus far, the robot in the trial has performed safely and effectively. Dr. MacLaren and other retinal surgeons hope to use robot-assisted injections and surgeries in future trials and procedures for other gene and cell therapies.

Jasmina Cehajic Kapetanovic, MD, PhD, presented the Preceyes clinical trials results in a poster at the 2019 annual meeting of the Association for Research in Vision and Ophthalmology (ARVO) that took place in Vancouver, Canada, on April 28 - May 2, 2019.