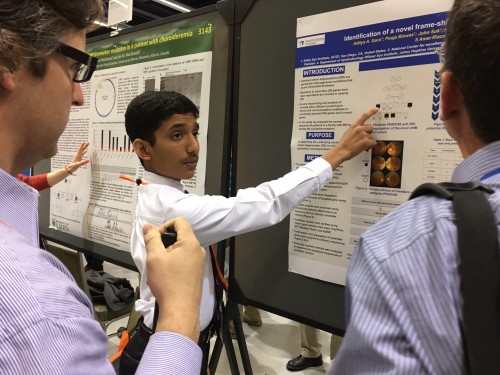 While I was perusing posters on genetic research in the exhibit hall at the ARVO annual meeting, Radha Ayyagari, Ph.D., an FFB-funded genetic scientist from the University of California, San Diego took me by the arm and said, "Come with me. There's something you really need to see."

So, of course, I went along, expecting to learn about one of her new, remarkable genetic discoveries. After all, she is one of the best retinal-disease geneticists in the world. But Radha took me to a poster where a boy was explaining to a group of scientists how he found the gene mutation causing choroideremia in a large family. "This is my son," she said, smiling broadly. "He's 16. He did this for a high-school project." In her humility, Radha refused to take any credit for influencing her son, Aditya A. Guru, in accomplishing this impressive achievement. "I think he follows my husband. He's the influence," she said. Radha's husband, Siradanahalli Guru, Ph.D., is a therapeutic vaccine developer with Pfizer. With the clarity and intelligence of a veteran scientist, Aditya explained to me how he used whole exome sequencing (WES), an innovative genetic-screening technology, to find the mutation. WES scans all of a person's exomes, the genetic regions where disease-causing mutations are most likely to occur. It is often used by researchers when standard genetic tests don't reveal the culprit gene. 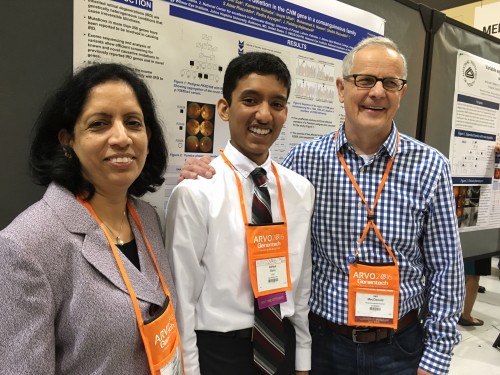 "It was hard to understand the science at first. I haven't even had AP biology yet," said Aditya. "But my parents helped me, and then I got it." "In 1991, I was recruited from India as an FFB-funded fellow, and this is what happened," Radha said after Aditya presented the poster to me. FFB's future chairman of the board, David Brint, arrived on the scene, and was so impressed, he began recruiting Aditya to the retinal-disease space. But, actually, Aditya is already on board; his choroideremia project was funded by FFB. Aditya also gets the fundraising side of research and helps out FFB as a VisionWalk volunteer in San Diego. Photos: top, Aditya A. Guru, age 16, explaining his work at ARVO 2016; and, above, with his mother, Dr. Radha Ayyagari, and Ian MacDonald, M.D., who is leading a choroideremia gene-therapy clinical trial at the University of Alberta in Canada.