A Steady Hand in Saving Vision

Subretinal injection is the most common form of delivery for gene therapies currently in clinical trials. 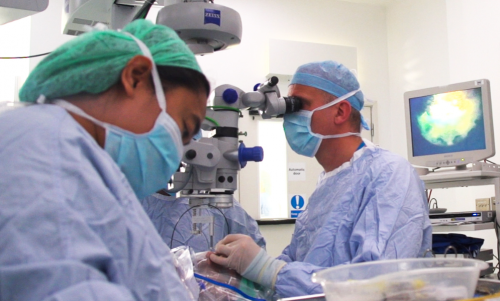 A retinal researcher can develop the best vision-saving stem-cell or gene therapy ever imagined, but if the doctor or surgeon can't deliver it to the retina safely and effectively, the treatment is worthless. It could even be harmful.

The retina is like a piece of wet tissue paper lining the back of the eye, which makes it a delicate and challenging target for therapy delivery. Retinas affected by disease like retinitis pigmentosa or age-related macular degeneration make them even more fragile and surgical procedures risky and difficult. Many retinal therapies in clinical trials today are delivered underneath the retina by injection. For example, in gene therapy, the treatment involves putting the needle of a syringe through the retina and then injecting a tiny drop of liquid containing the therapeutic genetic cargo. Known as a bleb, the liquid raises and detaches the retina, but after the patient rests on his or her back for a few hours, the detachment resolves with the therapy being absorbed into retinal cells. The following video shows the steady hand of Robert MacLaren, M.D., Ph.D., principal investigator and lead surgeon of the NightstaRx choroideremia gene-therapy clinical trial in the U.K., as he injects a bleb containing a gene therapy underneath the retina of a patient with choroideremia. If you have good vision and look carefully, you can see the bleb spread slowly and evenly near the injection site. https://www.youtube.com/embed/Mk5rZpyHe9c The biggest concerns with a subretinal injection of gene therapy are irreversible damage to the retina and ensuring the bleb gets to the cells that need it most. Dr. MacLaren is pleased that he has been able to successfully and safely deliver the gene therapy underneath the fovea, the small "bull's eye" of the retina that is rich in cones, the cells that provide central and color vision and the ability to read, recognize faces and drive. "My main goal has been to detach the fovea, get the treatment in and get the vision back to baseline. I didn't expect the foveas to degenerate, and I wouldn't have done the study if I had," says Dr. MacLaren. "But some patients have many years of useful vision left. I would have felt personally responsible if things hadn't gone as planned." Dr. MacLaren used a foot pump to provide a slow, sustained release of the bleb from the syringe. He and his team recently reported that five of six people in the choroideremia gene-therapy clinical trial have had sustained vision improvement or preservation for 3.5 years. Subretinal injection is the most common form of delivery for gene therapies currently in clinical trials, because it gets the treatment to the cells that need it. Researchers are also developing intravitreal delivery methods — injecting the therapy into the vitreous gel-like substance in the middle of the eye — because the procedure doesn't involve piercing the retina with a needle or detachment. The challenge with an intravitreal injection is getting the therapy close to the affected retinal cells. Pictured, top: Dr. Robert MacLaren performing eye surgery. Photo and video courtesy of Dr. MacLaren.