The Beauty in Embracing Yourself

Award-nominated recording artist Lachi has collaborated with some of the biggest names in the industry with millions of streams on her music. But with all her many amazing musical accomplishments, it wasn’t until a few years ago that she fully embraced herself as a legally blind artist who identifies with the disability community as closely as she does with music. 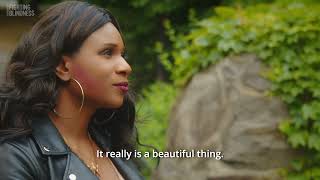 Lachi is an award-nominated recording artist, voice actress, author, and record producer who has released songs with SONY, Universal, and Warner Music, collaborating with some of the biggest names in the industry. With millions of streams and a social media community of more than 120,000 followers, she has earned a loyal fanbase. Her music has debuted on national charts, and has been mentioned in Essence, Forbes, and the New York Times. She recently hosted a brand new PBS Special “American Masters Renegades” which highlights the cultural contributions of unsung disabled heroes. Lachi has also started a coalition for recording artists and music professionals with disabilities called RAMPD.org. But with all her accomplishments, it wasn’t until a few years ago that Lachi fully embraced the person that she is: a legally blind artist who identifies herself with the disability community as closely as she does with music.

Lachi was born with coloboma, a disease that caused her retinas to not fully develop in the womb. She describes her vision as “a big hole” in the middle of her line of sight. The daughter of Nigerian immigrants, she and her seven siblings moved frequently throughout their childhood, from upstate New York to West Philadelphia, North Carolina, and other states in the U.S.

Vision loss doesn’t have to be the worst thing to happen to you. It’s just who you are. You’re going to be able to live your life to the fullest regardless.

“Growing up, my family didn’t treat me differently or like I had a disability,” says Lachi. “Going to public school made it difficult to make friends. I was ostracized and bullied for having a lazy eye or putting my books close to my face to read. My peers never knew how to react to me.”

Lachi would go home at the end of the school day and spend her time playing piano and writing poems as an outlet and form of expression. From an early age, she knew she wanted to pursue a career in music and entertainment, but her parents and teachers always encouraged her to have a “back-up plan.”

“Kids would ask me, who would you be, Stevie Wonder?” Lachi recalls. “It was difficult because there wasn’t anyone to look up to, there were no role models on television or the radio, no one to point to and claim, “I want to be like that.” There wasn't enough disability representation in the media to realize I could actually pursue my dream.”

Lachi started to gain a great deal of confidence in herself and in her talent as a musician, and she took her first step into the spotlight during her freshman year at the University of North Carolina (UNC). She joined several musical clubs and started her own all-female acapella group called Cadence, which continues to thrive at UNC to this day.

“I finally felt like I got to be a real person,” says Lachi. “I would play my piano on Saturday nights in our dormitory, and everyone absolutely loved it.”

From there, she started performing a few gigs around town. Then, in a meeting with her college supervisor, Lachi jokingly mentioned moving to New York City where there could be better music opportunities, and he encouraged her to pursue those dreams.

“It was some of the best advice I’ve ever gotten,” Lachi reminiscences. “Without question, he said to go, do it. And going to New York was one of the best decisions I’ve ever made.”

Without looking back, Lachi moved to New York where she studied music and writing, her other creative passion, at New York University (NYU). She immediately felt like she fit right into the city, especially with the ease of transportation and accessibility, helping her feel more independent.

Shortly after graduating from NYU, she was hired at the New York District's Army Corps of Engineers. While this was her “stable” day job that her parents always wanted, she continued to pursue music and started recording on her own. She even sang the national anthem during work assemblies, but it wasn’t what she envisioned her life in New York to be.

Lachi connected with a blind guitar player she had met while attending a blind camp, and they quickly decided to perform together at South by Southwest (SXSW), the music festival where industry leaders go to discover new talent. Before the event, she wrote letters to more than ten record labels, informing them of her scheduled performance. After one of her shows, a man came up to her, praising the performance, and gave her his card. He happened to be one of the producers she sent a letter to from EMI Records.

A year later, in 2010, Lachi signed a one album deal with EMI, but she continued to work her federal job, saving up her hours for performances. After that deal ended, she had the opportunity to work for a production company and finally decided to quit her federal job to put her music dreams first. She was quickly picked up by a well-known management firm, Big Management, which helped her collaborate with some of the biggest names in the industry, including Snoop Dogg, Styles P, and Markus Schulz. During this time, although she was certainly successful on paper, Lachi realized she had stopped speaking up about her visual impairments altogether.

“I stopped talking about my blindness because I didn’t want to make anyone uncomfortable,” says Lachi. “But I realized I needed to advocate for myself and use my success as a pillar for others. I really started opening this dialogue about disability representation in the arts and entertainment around 2018.”

This new era of Lachi’s musical career started with a performance at the New Jersey Disability Pride Parade. She now performs at Disability Pride events and speaks on diversity and disability inclusion on arts and entertainment panels. She always starts her performances by sharing that she’s visually impaired.

"My vision loss and the city of New York heavily inspire my music," says Lachi. "New York is a tough place, it's cutthroat, but the roughness is what makes it so beautiful. It’s a lot like my blindness; it's tough to live with, but if I didn't have it, I wouldn't be the hardworking and determined person that I am today. It’s that bittersweet beauty that comes out in my music and personality.”

Another evolution of Lachi as an artist, and in her life in general, is her physical appearance. After she’d been rejected at several auditions, Lachi decided it was important to have a spa day, relax, and take care of herself. After reflecting on this self-care, she realized she felt more confident about her appearance and herself. Now, her look is a big part of her brand and who she is as an influencer.

“Visual presentation isn’t something I was thinking about before,” says Lachi. “It’s not easy for the blind and visually impaired community to present themselves perfectly at all times. But we are living in a visual society, and people do judge on first appearances, so it's important to present yourself in the best light you can. But it doesn't have to be your make-up, hair, clothing, or any of that; it just has to be what makes you feel the most confident.”

With newfound confidence in herself, Lachi is fully committed to her advocacy work for the blind and visually impaired community and remains optimistic about future treatments and cures for her disease.

“In the past, my specific disease hasn’t had a lot of research for developing treatments,” says Lachi. “But it’s exciting to hear about investments in potential treatments, like CRISPR, that are helping people like me. Vision loss doesn’t have to be the worst thing to happen to you. It’s just who you are. You’re going to be able to live your life to the fullest regardless.”

Luckily, Lachi’s work hasn’t slowed down due to COVID-19. She has two new songs that just released, "Years" and "Dragon.” If you'd like to listen to her latest releases, visit: www.lachimusic.com/music