Carolyn is a business professional and beauty industry leader in Raleigh, North Carolina. In spite of her diagnosis with retinitis pigmentosa, Carolyn pursues exactly what she wants and knows what she is purposed to do in her life.

Since she was only 5 years old, Carolyn Marshall Covington dreamed of becoming a hairstylist. Her passion for the beauty industry led her to open her own hair salon at only 21 years old. Carolyn proceeded to open many other hair salons and day spas in Maryland, where she grew up, Virginia, and in North Carolina, where she resides now.

In 2000, Carolyn started to notice she was having trouble seeing at night when she was driving at the end of a long workday. She went to the eye doctor, anticipating she’d just get an eyeglasses prescription, but was instead told she had a rare eye genetic disease, known as retinitis pigmentosa (RP), that would cause her to eventually go blind, without any known cure. 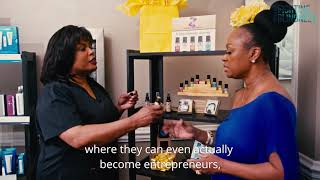 “I was devastated to be told I had a disease and there was nothing I could do about it,” says Carolyn. “I was in denial at first, not telling anyone about my diagnosis except my husband for years and I continued on with my life.”

Carolyn really started to notice her vision loss greatly decreasing years later in 2015. She then continued her business of opening salons and spas, but after a short time, Carolyn could no longer drive, and routine tasks were getting very difficult.

“After being on-the-go all of my life, the thought of being confined to my home was terrifying,” says Carolyn. “I spent about a year after I couldn’t drive in complete darkness because I was afraid to reach out to anyone and I wanted to figure out on my vision loss on my own.”

After deciding to move forward and be transparent about her vision loss, Carolyn reached out to the Division of Services for the Blind (DSB) for help. Through DSB, Carolyn was referred to the Raleigh Lions Clinic for the Blind and met Steve Murphy, who also has RP. Carolyn looked to Steve as a mentor who helped her to navigate in a “world built for those with sight.”

I’m not able to see outer beauty anymore, but beauty is a perception. Now I have to get a feel for a person’s inner beauty, and when someone shows me compassion and love, that’s what makes a beautiful person.

“My whole life was about being an entrepreneur and a leader in the beauty industry, so I was worried I wouldn’t be able to continue helping them if I couldn’t see,” says Carolyn. “It took the focus of my vision loss to enable me to lead again, but in different ways.”

From her involvement with DSB, Carolyn also realized that there were a lot of visually impaired people that were unemployed. Carolyn now serves others with disabilities in her community through her nonprofit, Insightful Visionaries, Inc., which was founded to support a better quality of life for people with disabilities, through career development, arts and entertainment. Carolyn travels across the country speaking at numerous schools, conferences, special events, and churches. These programs promote total wellness from all viewpoints, including Carolyn’s specialization in aromatherapy and reflexology.

“With losing my sight, I realized I would no longer be able to help create visual beauty,” says Carolyn. “But with my leadership background, I’ve been able to connect with people even more. I may not be able to see who is in front of me, their facial expressions or body language, but I listen very carefully and accept what people say and have found that beauty is within.”

In Carolyn’s self-discovery to learn more about her RP, Carolyn also got involved with the Foundation Fighting Blindness Triangle chapter and, for the first time, heard about the groundbreaking research for potential RP treatments. This news gave Carolyn hope to proceed as a leader and be herself again.

“My hope is that we will stop genetic eye diseases like RP in its tracks for generations to come,” says Carolyn.

It’s taken some time since her diagnosis, but Carolyn has used her passion for the beauty industry to now become an advocate and spokesperson for the blindness community.

“I’m not able to see outer beauty anymore, but beauty is a perception,” says Carolyn. “Now I have to get a feel for a person’s inner beauty, and when someone shows me compassion and love, that’s what makes a beautiful person.”