For those of us supporting the drive for vision-saving treatments and cures, he’s exactly the type of person we want on our team. 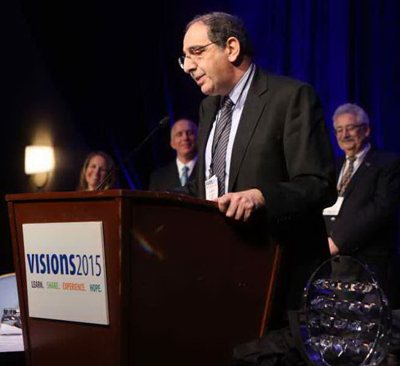 I've known Dr. José Sahel for more than a decade, and every time I'm with him, I'm impressed by his humility and graciousness. He's not much for rhetoric or small talk, but is always polite and insightful. Dr. Sahel is also very soft-spoken, but I think that's his secret weapon. He forces you to really listen to what he's saying.

You'd never imagine that someone with such a pleasant demeanor would be leading one of the most productive and innovative retinal-disease research centers on the planet, the Institut de la Vision in Paris. Not only am I surprised that he keeps an even keel with all he has going on; I can only wonder when he finds time to eat or sleep.

When Dr. Sahel isn't eating or sleeping, he's leading approximately 250 investigators and overseeing 25 clinical trials, including one for UshStat®, a gene therapy for Usher syndrome type 1B, and another for StarGen™, a gene therapy for Stargardt disease.

Dr. Sahel is also a scientific founder of Pixium, a company developing three bionic retinas, one of which is in a human study, and another more advanced device, still in preclinical development. Known as the PRIMA, it's designed to provide high-resolution vision, including facial recognition.

If that isn't enough, Dr. Sahel is also a scientific founder of the company GenSight. It's developing optogenetic treatments — innovative gene therapies which bring light-sensitivity to retinas that have otherwise stopped working.

Also, Dr. Sahel, Dr. Thierry Léveillard and his staff are developing a neuroprotective gene therapy that shows promise for keeping retinas affected by a wide range of diseases alive and functioning. Known as rod-derived cone viability factor, or RdCVF, it works like a drug factory to provide sustained release of a vision-saving protein to the retina. This project is a long-standing collaboration between Drs. Sahel and Léveillard that the Foundation has supported for many years.

The secret to Dr. Sahel's ability to manage so much research is his talent for fostering collaboration and motivating his colleagues. He leads selflessly. His focus is always on the project. For those of us supporting the drive for vision-saving treatments and cures, he's exactly the type of person we want on our team.